Who Is Salmon Valley Stewardship?

Salmon Valley Stewardship (SVS) is located in Salmon, Idaho.  Their website states it began with “assistance” and “funding” by the Sonoran Institute in 2004 and a Sonoran staff member, Adrienne Blauser, became the SVS Coordinator.  In 2005 Ms. Blauser attended a White House Conference on Cooperative Conservation along with multiple other non-governmental organizations (NGO).  This conference followed an executive order that “directed federal agencies to promote cooperative conservation in partnership with states local governments, tribes and individuals”.  It was nothing more than giving power to NGOs.

The SVS website states Sonoran donated two years of seed money for the SVS start-up, the funding ending in 2006.  Along with Sonoran, other participants in the creation of SVS included the Nature Conservancy and Brainerd Foundation.

While SVS states no further funding was received from the Brainerd funded organization Sonoran, funding merely shifted from Sonoran to Brainerd in 2006 once SVS was created.  Gina Knudson became the SVS Executive Director (ED) in 2007, leaving that position in 2016 to become the Salmon-Challis National Forest (SCNF) Collaboration specialist.  Ms. Knudson has been involved in the Great Northern Landscape Conservation Cooperative (GNLCC), the Rural Voices for Conservation Coalition (RVCC), and National Forest Foundation (NFF).  Other SVS participants have included NGOs, foundations, and federal, state, and local agencies.

Perhaps the most disturbing activity Ms. Knudson participated in as the ED is the Heart of the Rockies Initiative (HOTRI), with its participating NGOs.  She also participated in the HOTRI  facilitated group, the High Divide Collaborative (HDC).  SVS is considered a HOTRI “collaborative partner“, along with the government, foundations, and land trusts.  The HDC has multiple NGO and land trust participants, along with state and federal agencies.  The only collaboration going on is between these groups.

In 2010, the HOTRI developed a plan for cooperative conservation.  HORTI is using the High Divide as a linkage area that includes Lemhi and Custer counties.  Their intent, “develop and implement a collective strategy to ensure that, by working with willing private land owners, the most significant private lands in the High Divide are conserved in perpetuity.”  With the government and NGOs, SVS is listed as a participant in the High Divide Focal Area Workshops specific to conservation in Salmon-Lemhi.

Ms. Knudson, while serving in her new role as USFS Collaboration Specialist, also attended the HD workshop in 2017, and discussed the beginning stages of the SCNF plan revision collaboration while “Alex Dunn, the Environmental/NEPA Coordinator for Beaverhead-Deerlodge National Forest then talked about examples of stakeholder led collaboratives that can lead to all lands conservation at large scale.”

Toni Ruth became the SVS ED in 2016, participates as an HDC coordinating committee member, attended the 2017 HD workshop, participated as a panel member on the 2018 HD workshop agenda, and is on the list of attendees at the HDC hosted 2019 celebration with Kim Trotter, Y2Y U.S. Program Director, by her side, even though the SVS website states it is not a participant in Y2Y.

Created in 2015, the Central Idaho Public Lands Collaborative (CIPLC) is another SVS front group to insert HDC objectives into forest planning.  The initial group was comprised of almost half NGO, state, and federal individuals and included many of the 2016 HDC workshop objectives.  By 2019 that list had grown as “diverse” members were added resulting in increased confusion about the group’s role.  CIPLC is nothing more than another group to promote the false pretense that citizens are involved, used as a means of promoting a phony narrative of consensus, overpower citizen input, and implement NGO objectives.  It should be no surprise Ms. Knudson was selected as “Collaboration Specialist”, the USFS has been working with her for years on the same HDC objectives.  Creating a “diverse group of citizens” really means diverse government and NGO members.

Other conservation initiatives focusing on the High Divide are the National Fish & Wildlife Foundation (NFWF), Y2Y, and previously the GNLCC.  As part of their objective to prioritize routes for grizzlies and wolverines, they intend to secure “protection of those routes from development” including purchasing private land, establishing conservation easements, preclude development such as timber harvest, oil and gas development, mineral extraction, and road building, limiting hunting, guiding land development with regulations, educating the public and children on connectivity”, and the list goes on.  SVS has participated with these groups for the same objectives.

At the 2005 White House Conference on Cooperative Conservation, the federal government deliberately placed NGOs at their table.  Collaboration is between them, a deceitful way in which NGOs are used to implement their agenda for our land.  Like a cancer cell replicating itself, these NGOs continue to grow themselves with new front groups in partnership with the government.  It is one way the government has grown itself and the agenda is controlling land use.  NGOs call it “capacity building“.

All of these NGOs have only one goal in mind, conservation of land, mapping out and planning how they think the land should be managed and used, called landscape conservation design.  Using money from foundations and your tax dollar, their goal is taking land for permanent protection, using wildlife and other environmental aspects to create corridors, targeting private property and unprotected land for linkage areas between protected areas for connectivity, and interfering in local land use plans to insert conservation regulations.

Our Republic does not operate on collaboration and consensus, decisions are made by local government jurisdictions and citizens, not “stakeholders”.  Locally elected Representatives are responsible to citizens and how they want their jurisdiction and land managed.  Those decisions do not belong with individuals or groups from outside of the area, especially when they are working with the government, and laying contrived plans for redesigning the land for conservation.  NGOs and the government are buddies, admit it. 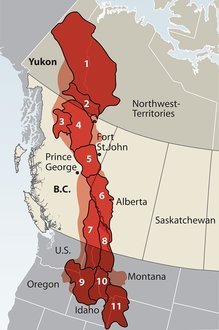 SVS is the poster organization for how the federal government has developed a methodology to take and control land use in their partnership with NGOs, operating without full disclosure to citizens.  “Stakeholder” is an empty word meant only for NGOs and their cronies, and a slick way to hide the lack of citizen involvement.  Citizens are never given a legitimate place in the conversation, behind the scenes planning, or at the “collaborative” table.  This is a statewide problem.  It is the exact same playbook that NGOs and the governments use elsewhere.

The foundation of our Republican form of government should be reinstituted.  The USFS is a public servant, responsible to citizens, and should only be working with those who live in the forest plan revision area and locally elected representatives.  Citizen perspectives should be given priority, not from some group created “consensus” which is intended to dilute citizen voices.  It is time this long game is ended.  There is no shared stewardship which is used only for erasure of jurisdictional boundaries.  Our Republic does not operate that way, authority lies with the people in the local jurisdiction.

SVS, their NGO partners, and the government should disclose what they are really doing, the work they have engaged in together for years, and their planned landscape conservation design to be executed on local communities.  It should also be brought forth their interfering with local land use plans that include regulatory restrictions on land and inserting themselves into forest revision plans for their conservation objectives.

To SVS and their NGO and government pals, don’t underestimate the intelligence of citizens, or their ability to recognize when they are being manipulated or dismissed.

It is time for citizens to take the narrative back and exercise their authority.

Heart of the Rockies Initiative 2010 PDF

Refugee Resettlement in Sandpoint? (with Video)

3 Comments on Y2Y – Who Is Salmon Valley Stewardship?