Trials and Protests – Update from Pahrump!

By Shari Dovale and John Lamb

Lots of news coming out of Nevada this week.

The first tier of Bunkerville defendants are awaiting a status hearing next week, mostly for motions and other items related to the re-trial of their case.

The prosecutors have said that they will not be charging Todd Engel or Greg Burleson again on the charges the jury deadlocked over. Each was found guilty on lesser charges and are scheduled for sentencing in July.

Engel was found guilty of two charges and the Prosecutors are asking for “Terrorism” enhancements for his sentencing. He is now facing a possible 30 years in prison, due to these enhancements

Burleson was found guilty of 8 out of 10 possible charges and faces a total of 57 years in prison. The prosecutors are not asking for the same terrorism enhancements against Burleson.

The remaining four defendants will be re-tried beginning June 26, 2017. The second tier defendants, which include Cliven Bundy, will not begin their trial until 30 days after this one is completed. The trial is expected to take up to another couple of months, so the second trial is not expected before September at the earliest, more likely October or November.

Jerry Delemus was one of the first defendants to reach a plea arrangement with the government. Based on reports, he was coerced into making the agreement as his friends and family were targeted for arrest if he did not agree.

As soon as the first Oregon trial ended in October 2016, Delemus filed for a hearing to have his plea changed. He has waited for months to get his hearing.

Judge Gloria Navarro has finally ruled that Delemus will not receive a hearing and has scheduled him for sentencing later this month.

Reports are surfacing that Blaine Cooper is expected to testify against all of the defendants in Nevada. Cooper has stated that he will cooperate in order to get a reduced sentence for himself. Prosecutors have suggested a six year sentence for Cooper.

Camp Liberty is holding strong despite the ferocious winds that prevail. They have raised, at last count, over $25,000 for the defense of Ammon Bundy. They continue to protest, and are garnering support from the local community.

Though they had originally set up camp on the roadside across from the Pahrump Detention facility, and had been there for couple of weeks, the acting under-sheriff paid them a visit this week. Though he was polite about his message, he was very clear that they had 24 hours to get a permit or leave, as they now faced trespassing charges.

A local Patriot came to their aid and gave them leave to camp on their property, which is actually a better location right behind the Facility. They have set up and been supplied with all the food they can eat. The only thing they might be needing is basic camping supplies for those that did not bring enough, such as sleeping bags and tents. Tarps would also be nice to use as wind breaks.

But the government keeps trying to throw curve balls at the protesters. Earlier this week, Brand Thornton attempted to visit the prisoners in the facility. Many of you may remember that Judge Anna Brown in Oregon has dubbed him “Mr. Shofar”.

Thorton had his shofar with him when the guards decided it was a dangerous weapon, and even called it a bow-and-arrow. A SWAT team surrounded him and he has now been banned from the facility completely.

CoreCivic (formerly known as CCA) is a privately contracted company to run the Southern Nevada Detention Facility in Pahrump, as well as other facilities. This facility is strictly a holding place for those that have not been to trial, or not been sentenced. From here, the prisoners get moved to permanent locations.

It must be considered low security as many of the “guards” are only armed with batons and pepper spray. There are very few guards with firearms.

However,these glorified rent-a-cops have allowed power to take them over, They use this power against prisoners, and now the protesters.

They have filed multiple false reports of protesters violating their space. Violations that include (falsely) that protesters stepped across the boundary lines and onto prison property, or that protesters slapped a moving prison bus. These reports are going nowhere, as it has been proven by video that they are false. Yet, the guards continue to attempt heartache with more reports.

The protesters will not give up easily though. For now they are camped behind the prison, making daily treks around the compound in their “Jericho March.”

They continue to raise money and see support from the local residents. The can receive mail from the postmaster, addressed to:

They are accepting 2 types of donations. First for the defense of the prisoners, and second for the continued protest. They do not need much for their stand outside the prison, however, they do provide transportation help to others that would like to come and be a part of the protest.

For The Federal Team, Losing Is Not An Option 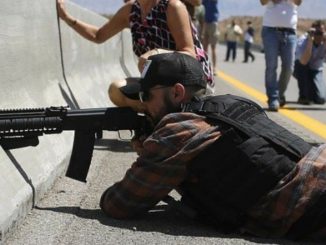 2 Comments on Trials and Protests – Update from Pahrump!