Andrea Parker, wife of defendant and Bundy supporter, Eric Parker, in a recent recording on Facebook, explained that she and Eric made the long and expensive trip from their home in Idaho to Las Vegas to attend the hearing held in federal court regarding the combining of Eric’s upcoming trial with the trial of the next tier of defendants to include some of the Bundys.

Gloria Navarro had given Parker the option of appearing through telephone hearing. Parker chose to travel to Las Vegas instead.

The physical appearance in Las Vegas by the Parkers sends a loud message to the federal team (judge, prosecutors, marshals) that:

1. Eric never was and never will be a flight risk

2. He is supporting the other innocent defendants who remain in pretrial hell (prison)

3. He never was and never will be guilty of wrongdoing or breaking constitutional law.

LET ME SEE YOUR JOHN HANCOCK

Normally, when somebody has been in pretrial hell and has suffered the trauma of being detained, demeaned, demonized, denigrated and deprived of their rights, that person tends to want to stay away from the scene of their suffering. Eric Parker, instead of taking a more comfortable road, bravely chose to appear before those who heaped incomprehensible injustice upon him.

Navarro and other federal judge pretenders, have two options to deny bail to a defendant under the unconstitutional Bail Reform Act, flight risk and dangerousness. Flight risk only requires a preponderance of evidence, the lowest of the evidentiary standards. Dangerousness requires clear and convincing evidence, the next highest standard. Beyond a reasonable doubt is the highest standard.

Flight risk, by itself, can justify pretrial detention. Basically, the only thing required to be considered a flight risk is for the judge, in his/her discretion, to declare that the person is a flight risk. Once the judge invokes the flight risk reason for denying bail and for pretrial detention, that sets in motion all kinds of unspeakable hell for the defendant who is subject to all the horrors of prison life, exactly like a convicted prisoner found guilty after trial.

The horror of pretrial prison is further amplified by a corrupt prosecution who has all kinds of tricks up their sleeves to not only get the pretrial detention but to prolong it for more than five (5) years by declaring it a complex trial, thus nullifying and vacating the right to a speedy trial.

Eric Parker, from the beginning, was able to show that he was not a flight risk. He had voluntarily turned himself in to law enforcement, once he was made aware of an arrest warrant for him. His cooperation with law enforcement was rewarded by the pretrial prison and by the horrendous treatment in court, being denied his right to testify in his own defense and being called by Prosecutor Myhre, “a slithering coward”.

THE MOCKERY OF DETENTION HEARINGS

The appalling use of flight risk as an excuse for keeping innocent defendants in prison, not only applies to Parker, but to the other defendants as well. Dave Bundy had hundreds of letters of support from friends and community members attesting to his honesty and his attachments to the community. Dave Bundy even had the support of his local sheriff in offering to personally monitor Dave to assure his compliance with the court orders and to report for all hearings and trials. In spite of such overwhelming evidence of not being a flight risk, the judge proceeded with pretrial hell anyway. 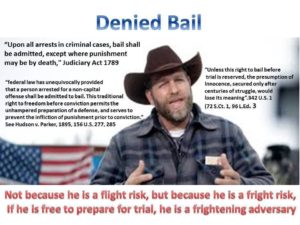 The most outrageous example of the federal team’s warped and tortured logic is the recent treatment of Ammon Bundy. Like Parker and the other defendants, flight risk was used to condemn Ammon to pretrial hell, almost 600 days of it. Under the guise of assuring Ammon’s appearance at future hearings and trials, he is forcibly detained in a federal prison so that marshals can forcibly transport him to hearings.

Part of being a pretrial detainee is being subject to strip and body cavity searches wherein the prisoner is required to remove all their clothes and while stark naked, be subject to having genitals and body parts inspected by prison staff.

Ammon has taken the position that he is innocent until proven guilty and that he has never been found guilty of anything. In fact, he was found not guilty in Oregon, adding further weight to his claim of not being dangerous nor a flight risk.

Ammon invokes the 4th amendment protection against unreasonable searches as an innocent citizen who is not a convicted prisoner. Nevertheless, the federal prison policy is to treat all prisoners the same, convicted or not. Ammon has declared that he will not remove his clothes but will not resist prison staff from removing them for him. In a contest of wills, the prison staff has punished Ammon Bundy for not removing his clothes by keeping him in solitary confinement.

Now, here is the kicker, Ammon Bundy was supposed to attend the most recent hearing in Las Vegas, the same one that Eric Parker attended physically instead of appearing by telephone hearing. But, because he was being punished for not removing his clothes, he was not allowed to attend his own hearing.

Has it sunk in yet? Do you grasp how awful this is? He has been kept in pretrial hell for the express purpose of being available for all hearings and trials. Yet, he is not allowed to attend hearings because he will not voluntarily remove his clothes so that he is not sexually violated.

I gasp for air as I try to find an appropriate way to describe this breathtaking inconsistency. I gasp for air as I realize that, you and I and many people we care about, are in danger of the same treatment if we ever find ourselves challenging the constitutional abuses of a giant, behemoth federal government.

Bunkerville Trial as Strange as Jonah and the Whale 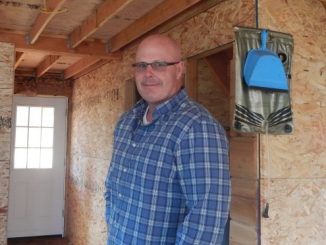