The FBI has been “seriously and systematically abusing its warrantless electronic surveillance authority” by overstepping the limitations under Section 702 of the Foreign Intelligence Surveillance Act” (FISA).

We’ve been saying this for years, certainly ever since it was learned that the Russia hoax and the fake Steele “dossier” were used to fraudulently obtain warrants from them to spy on Trump campaign associates. You know it, we know it, we all know it, and now the Foreign Intelligence Surveillance Court (FISC) has finally offered evidence of it, in a 67-page opinion issued by presiding judge James Boasberg. (It actually came out last November but has just now been made public.)

Actually, the above quote is from Rep. Jim Jordan of Ohio and Andy Biggs of Arizona, who’ve just sent FBI Director Christopher Wray a strong letter about the problem of “widespread abuses” and “illegal spying activities.” Jordan is ranking member of the House Judiciary Committee and Biggs serves as ranking member of the House Subcommittee on Crime, Terrorism and Homeland Security.

As THE EPOCH TIMES explains in a premium report , Section 702 of the FISA law allows the attorney general and the director of national intelligence to jointly authorize, without a warrant, the surveillance of non-U.S. citizens residing outside the United States. When this is done, however, they’re supposed to adopt “targeting procedure” to make sure the spying is indeed limited to non-citizens and also to prevent the “intentional acquisition” of communications within the U.S.

(Recall that when James Clapper was asked under oath if the intelligence community ever gathered the conversations of U.S. citizens, he lied and said, “Not wittingly.” Clapper apparently was trying to appear Section 702-compliant. I digress.)

According to this opinion from the FISA court, the FBI used Section 702 authority for the purpose of obtaining information about Americans, and Judge Boasberg cited examples such as one FBI task force officer who conducted 69 queries that were not in compliance with official rules.

His court found that numerous queries of Americans were designed to return evidence of a crime completely unrelated to foreign intelligence, without obtaining a court order. So the court went back a year, and they found the same pattern. This causes them to suspect that “similar violations…likely have occurred across the Bureau.”

In their letter, Reps. Jordan and Biggs refer to the 2019 OIG (Office of Independent Counsel) report by Michael Horowitz that reviewed the warrant applications to surveil (SPY ON) Carter Page. Recall that this report listed 17 errors and omissions in those applications. They call for Wray to explain why, a year after that report came out, the FBI is obviously still abusing its authority. And they want an accounting of how many times since that report came out that the FBI has “queried, accessed, otherwise used information obtained pursuant to Section 702 for purposes unrelated to national security.”

Jordan appeared along with Wisconsin Sen. Ron Johnson on Sean Hannity’s TV show Tuesday night to talk about these abuses, particularly the unequal application of justice. Sen. Johnson also spoke of the “complete set-up” of Rudy Giuliani with the fake story leaked to the WASHINGTON POST, the one about Rudy getting an FBI defensive briefing about being used in a Russian disinformation plan. Great interview.

It occurs to me that the FBI might try to wiggle out of this by citing its new, expanded definition of “national security” to include all the millions of “domestic terrorists” who supported Trump and still suspect there might have been some hanky panky going on during the 2020 election. Why, the Bureau HAS to spy on THOSE American citizens — it’s a matter of national security.

A senior FBI official says the FBI has taken numerous steps to better help staff meet relevant legal requirements and blah blah blah. I would be very surprised if, without a huge cultural shift at that organization, anything has really changed.

Commentator and documentary filmmaker Dinesh D’Souza goes farther, to say that it’s time to dismantle the tainted institution of the FBI and start over. His piece is also premium material at THE EPOCH TIMES, but the website 100 Percent Fed Up has lengthy excerpts and some good comments.

This isn’t the FBI of “The Untouchables” anymore, he says. It’s quite obviously been “corrupted from the top.” To show the entrenched partisan bias within the Bureau, he compares how the Jan. 6 activists have been treated compared to activists from Black Lives Matter and Antifa, who have “looted businesses, burned churches, assaulted police officers, attacked and harassed ordinary citizens eating in restaurants or going about their normal lives –- and all with impunity.”

He also compares the treatment of Trump attorney and former New York mayor Rudy Giuliani, whose residence was unnecessarily and unconstitutionally raided, to that of Gov. Andrew Cuomo, who is “currently involved in two separate scandals,” his alleged direct involvement in covering up nursing home covid deaths and also the sexual harassment complaints.

“While Giuliani’s offense remains unclear,” D’Souza says, “Cuomo is guilty of obvious abuses of power — actions that have not only put people in their graves but also amounted, in a statistical sense, to ‘hiding the bodies.’” But the FBI, as far as we can tell, is nowhere to be found.

I would add that they don’t want Hunter Biden’s hard drives, either. There clearly are two standards of justice.

“Enough is enough!” D’Souza says. “When justice no longer involves the neutral or equal application of the laws, it ceases to be justice. I realize, of course, that there will be no FBI reform under Biden. Therefore, I strongly urge the Republican Party to make the abolition of the FBI — shutting down the agency and then reconstructing it from the ground up — key provisions of its campaigns both in 2022 and 2024.”

And it’s looking as though that might be the only way to fix it. Talk about “building back better” — that’s one place where it makes sense.

Come to think of it, another place might be the CIA. By now, you’ve probably seen the new “woke” CIA recruitment ad. Two mortifying minutes; if you haven’t seen this, force yourself.

Hey, if you, too, are intersectional, a woman of color, a cisgender millennial, formerly suffering from imposter syndrome (apparently cured) and currently diagnosed with generalized anxiety disorder, who enjoys intoxicating people with her brilliance, who refuses to internalize misguided patriarchal ideas of what a woman can or should be, who commands her space with no apologies, the CIA is the place for you!

If anyone needs to apologize, it’s the CIA, for this embarrassment. Who in blazes is running that show? What D’Souza said about the FBI could just as well be said about them.

You’ve heard the expression, “Get woke, go broke.” To that, I would add, “Get woke, be a national joke.” 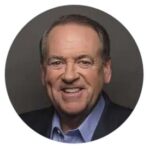 Mike Huckabee was the 44th governor of Arkansas and a 2016 Republican candidate for president.

Will God Intervene To Save Our Nation?