Florida’s Governor Ron DeSantis is stepping up to the podium and showing true leadership by re-opening his state.

DeSantis announced today that Florida will lift restrictions on restaurants and other businesses, as well as make it more difficult for local governments to go rogue against their citizens.

Returning the state to a pre-pandemic way of life, local municipalities and counties will no longer be able to levy fines and fees related to Covid-19(84). As reported by the Orlando Sentinel, the order prohibits local governments from closing businesses or collecting fines related to pandemic-related mandates, such as mask requirements

“We are today moving into what we initially called phase 3,” DeSantis said during a news conference in St. Petersburg. “And what that’ll mean for the restaurants is there will not be limitations from the state of Florida. We’re also saying in the state of Florida everybody has a right to work. (Local governments) can do reasonable regulations but they can’t just say no.”

A survey conducted by the governor’s office showed local governments issued $2 million in citations relating to the virus.

And There Is More!

The reopening order come on the heels of the Florida Governor announcing the proposal of a new law called the “Combatting Violence, Disorder, and Looting and Law Enforcement Protection Act“.

This massive beat-down of Black Lives Matter, Antifa, and other violent groups promises guaranteed consequences for violent protests and those that fund them.

The anarchists on the left are having conniption fits over the proposed legislation, claiming it is to stop justice for Black Lives. They are spouting figures that are provided by the U.S. Crisis Monitor that over 93% of this year’s racial justice protests have been peaceful.

They do not discuss the violent 7% referred to in those numbers. However, the 93% (if that is the case) have no reason to worry because the law that DeSantis proposes would not affect any peaceful protest.

Peaceful protests are fine, and guaranteed. However, the minute anyone crosses the line to violence, as they have done in Portland and Seattle, then they are breaking the law.

Additionally, there will be no “Defund the Police” actions in the state. Jurisdictions that attempt this will lose their grants and other government aid. As will the violent protesters! They will lose any government benefits they are currently enjoying, such as unemployment.

These are bold and necessary moves, and we applaud Governor DeSantis for getting this ball rolling!

The Combatting Violence, Disorder and Looting and Law Enforcement Protection Act has three components, outlined below: 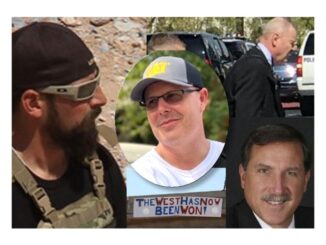 An Open Letter on The Great Reset