UF Lies About Their Bias At Trump Jr Rally

More from the files of the progressive indoctrination of our students in Public, State-Controlled Schools.

The University of Florida showed their bias against their conservative students this week when they supported the complete disruption of a conservative rally.

This University statement is a demonstrable lie. Our entire core membership, as well as Young Americans for Freedom and College Republicans, witnessed a hecklers veto the entire night. Had it not been for spirited patriots who applauded the speakers’s positive message, the night would have been ruined for everyone.

Protestors continuously disrupted the speakers and the University did not fulfill their obligation to enforce the rules of respect. Protestors slandered Donald Trump Jr. and Kimberly Guilfoyle with names like “white supremacist,” “racist”, and other disgusting names.

We’re thankful to accent speakers bureau for bringing Donald Trump Jr. and Kimberly Guilfoyle, but the University’s pathetic, dishonest statement once again proves the bias against free speech for conservatives on campus.

Though they posted guidelines for the event, they obviously did not mean to include anyone that actually disagreed with the speakers. It must have been meant for those that might have been upset at the disruptions. 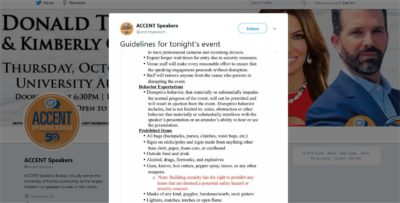 The statement from UF concerning the protesters said:

“…students at the University of Florida exemplified civility and tolerance this evening. Despite intense disagreement among students over the invited speaker, the event proceeded without disruption.”

Campus Reform was at the rally, and provide some video:

Campus Reform also reached out to UF for further comment and clarification. UF spokesman Steven Orlando responded by acknowledging that “there was disruption.”

“You’re right, there was disruption at the event, but in the end those who went to hear the speakers were able to do so, and the speakers were able to complete their program in its entirety. We do indeed set the expectation of behavior and civil discourse, and we reiterated those expectations repeatedly prior to the beginning of the event. Several members of the audience who were repeatedly disruptive were asked to leave, and they did so voluntarily,” Orlando said.

Liberty Advocates and the Freedom Agenda