The Federal Negative: How Much Freedom Should The States Have?

Should the US Constitution be changed through a Constitutional Convention, otherwise known as an Article V Convention or a Con-Con?

This seems to be the question that is engulfing our legislatures throughout the country, and closer to home, the Idaho Legislature in Boise.

This question has come before the Idaho House not once but TWICE previously and has been voted down each time. Yet the elite rulers of the Idaho House, led by Speaker Scott Bedke, insist that this will go through. They continue to put it to a vote, and it is said that there will be yet Another vote this session.

However, before the vote goes through, like all good politicians, Speaker Bedke must lobby to get his votes in order to pass this resolution.

He began with a couple of taxpayer funded trips for his select legislators. Beginning with a trip 2 years ago to Virginia, then another trip for a record number of legislators to Arizona last year. These trips were specifically to “practice” or “simulate” the Article V Conventions and get these legislators on board with the agenda.

Yet, Bedke still does not have enough votes to pass the resolution. So, he must force his will again.

Speaker Bedke reportedly announced in the Idaho House, on January 22, 2018, that all committees will suspend their work on February 9th to hear a presentation by Dr. David Moss of Harvard Business School. It was said that the reading of Moss’ “case study” was required and that attendance at the presentation was mandatory,

When word got out about this, citizens throughout the state threw fits over this abuse of power. After twice having this question put to their elected representatives, and having it voted down, the Speaker of the House was insisting on repeating it until he got his way.

Cries of “Foul” were heard, as well as comments likening this treatment to Levy Votes (keep putting it on the ballot until you get the answer you want).

Additionally, a citizen emailed Speaker Bedke to ask him about this and received the following reply:

Because of the public outcry, Bedke sent the following letter to all House members: (emphasis added)

I want to clarify the plenary session with Dr. David Moss, Harvard Business School, that will take place from 8:30 to 10:30 a.m. on Friday, February 9, 2018.  Dr. Moss’s presentation is NOT – repeat NOT – a discussion regarding an Article V convention.  His presentation will NOT address that topic, NOT encourage that topic and will NOT be related to an Article V convention.

To reiterate – Dr. Moss’s presentation will NOT address or deal with an Article V convention.  It will, however, deal with what we can learn from the Constitutional Convention of 1787, the political struggles and disagreements the founders labored through, and the achievement they reached through hard work and a willingness to hear the “other” side.

Please see the links below to Dr. Moss’s faculty profile and his book.

However, this does not negate what was actually said in the House chambers during the initial announcement. Watch it for yourself below:

As you can see, Speaker Bedke made the following statements:

It is certainly believed that this is a required, or mandatory, presentation about the Article V Convention.

Even if we were to believe that it is not, let us look at what fascinates Dr. Moss: The Federal Negative.

The Federal Negative was the idea that the National Government needed a way to reign in states that were not on board with the Federal ideas. This was their way to skate around the idea of “State Sovereignty”.

Putting a “Federal Negative” into the Constitution would give Congress the authority to veto any law passed by a state legislature.

Do we want to voluntarily give up our state sovereignty to the Federal government? Is this what Speaker Bedke is having presented to our elected officials?

To get this done, they will need to amend the US Constitution through … wait for it … an Article V Convention!

But it is what Speaker Bedke seems so focused. on.

Call your Legislators and continue calling them. Do not let this issue die a quiet death. Say NO to the Con-Con! 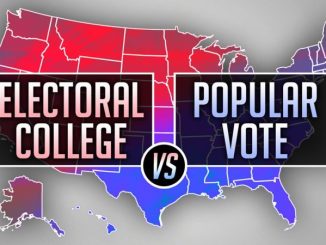 1 Comment on The Federal Negative: How Much Freedom Should The States Have?