January 8th, 2018 is a historic day, not only for the trial of USA v Cliven Bundy et al, but for many legal proceedings to come.

There were well over 100 people that went to the federal district court in Las Vegas on January 8th.  Not all made it into the courtroom.  At least 8 that made it in to see the proceedings were former jurors on this trial, who were dismissed on December 20th.  Many others were family and friends of the defendants and about 30 others were from the media.

Judge Gloria Navarro found that the prosecutions conduct was “grossly shocking” and “flagrant”.  She based her decision to dismiss the indictment with prejudice on the need to maintain “judicial integrity” and to “deter prosecutorial misconduct” in the future.  Navarro took about an hour to explain the case law that supported her decision.

Dismissal of the indictment will erode the credibility of the other convictions and plea bargains stemming from the original grand jury indictment of all 19 men arrested for the Bundy Ranch protest.  From that indictment, the court later organized the defendants into three tiers, each group having a separate trial for the courts convenience. 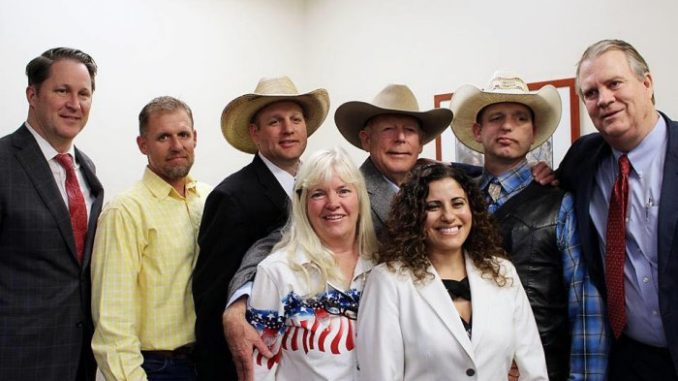 Judge Navarro also mentioned Larry Wooten, BLM’s lead investigator of the Bundy case for nearly three years, until he was dismissed on February 18th, 2017.  The prosecutor, Steven Myhre, had “furiously demanded” Wooten’s removal from the Bundy investigation through Wooten’s supervisor at BLM just a day or two before Wooten’s dismissal. Navarro’s reference to Wooten was short, but the fact she put it in the court record is significant.  She simply stated that there was likely to be more prosecutorial misconduct and even BLM and FBI wrongdoing associated with this case.

About half of the observers broke into tears of joy as it sunk in that the charges against these four men were dropped.  After the courtroom was dismissed, Cliven Bundy hugged his wife, Carol, for the first time in 22 months.  Cliven requested the media take a picture of the shackles being removed from his ankles, but because no cameras or media were allowed as he was processed to be released, no one could.

A crowd greeted Cliven, Ryan, and Ammon Bundy as they left the courthouse,  Ryan Payne was told to report to the Federal Marshals Office to be instructed on how he would proceed.  Although charges are dropped for this case, Ryan Payne will need to appear in Portland, Oregon, in regards to a plea agreement pertaining to his participation at the Malheur Refuge protest.  All the remaining defendants that have plea agreements, convictions or are still awaiting trial for the Bundy Ranch protest, must have their attorneys file motions on their behalf to dismiss their own charges.

U.S. Attorney General Jeff Sessions announced January 3rd, 2018, that Dayle Elieson will replace Acting U.S. Attorney Steven Myhre, effective January 5th. Elieson was one of 17 interim U.S. attorneys who’s appointment was made public on January 3rd. Myhre was returned to his role as First Assistant U.S. Attorney.  Attorney General Jeff Sessions has sent an evidence discovery expert to Las Vegas to review the Bundy case.  Although unlikely, it is possible for Elieson to appeal the dismissal.

“BLM Did Not Look Like Yogi Bear” – Bunkerville Update