Rendering Unto Caesar? Bonner County Board of Equalization

The Bonner County Commissioners, acting as the Board of Equalization (BoE), adjudicated assessed property values for owners who filed BoE appeals prior to June 26, 2017.   According to the Commissioner’s Office approximately 330 parcel appeals were filed for the July 2017 BoE hearings.

If the market sales and related assessment values are out of line by percentage, the State Tax Commission Board can intercede and make arbitrary assessment adjustments.  “Either we do it or they’ll do it, and we don’t want that,” says Commissioner McDonald.  The state’s interest is to permit equitable sharing of cross county funding, that Lakeland School District, being one example.

Assessor Clemons noted, “at the 90% level the taxpayer is assessed the minimum allowed by the state, I could have assessments as high as 110%.”  Will the appellant get a fair BoE and subsequent appeal hearing when county assessments are below the mandated state percentage,  89% this year at the onset of BoE hearings, which both the Assessor and the Tax Commission are required to enforce?

Is the quasi-judicial process fair absent full disclosure?  Each appeal submission goes to the Assessor through the Commissioner’s Office.   Does the appellant receive the Assessor’s evidence prior to being seated at the BoE hearing?  Is the entire neighborhood list (4 digit code) of sold parcels, provided without specific and formal request from the appellant?

According to Assessor Clemons, trending assessment occurred in “some areas…, about 2 percent” of this year’s inspection area parcels, without any existing policy and/or any area data analysis according to a public record request response.   Is this process equitable when at least one privately owned parcel… has not had an increase in four consecutive years?   How many parcels are without assessment increase in the last four years?   While sticker shock is painful, taxpayers will pay more in taxes if the assessment is increased year to year, as opposed to receiving a full market value increase once every five years in an increasing sales market environment.

The Bonner County Assessor and Commissioners desire a meandering line of waterfront property assessment as the “preferred valuation” method.  However, the State Tax Commission Board ruled in the 2016 appeals case, John Brumley v. Bonner County, that “while we understand the Assessor’s argument, it is fundamentally flawed because by Assessor’s own admission some parcels on the lake are currently valued using the pin-to-pin method.”  Both the Assessor’s Office and the Board of Equalization openly discussed an expectation of a class action response by the Priest Lake State Lessees’ Association’s (PLSLA) waterfront appellants to overturn the 2017 BoE decisions.  Many PLSLA appellants described the meandering line assessment, consistently as “unfair and inequitable,” as did the returning John Brumley, and additionally Randy Absalonson, PLSLA’s 2017 President  and Vice-President elect, respectively.

“Unbuildable” property is being targeted by the Bonner County Assessor and the Commissioners.   One appellant filed an evidentiary document issued by Panhandle Health deeming the property “unbuildable,” seemingly meeting the preponderance of evidence standard!   The appellant was made to have the multi-decade old document delivered again, if it can be found, or lose a conditional reduction in his assessment!

Assessor Clemons has stated he will be pursuing methods to remove the “unbuildable” determination by imputing alternative forms of septic waste disposal on current parcels.  To prevail at the BoE hearing under an “unbuildable” claim, the appellant must include a Panhandle Health inspection and report costing at least $400.00, often more than the taxable amount!  Additionally, the Assessor will be hiring a certified forester onto staff to identify non-compliant timber exemption plans, seeking to increase assessment values, supporting Commissioner Connolly’s stated viewpoint that timber exemptions “are a farce.”

The BoE further adjudicated that small, temporary buildings (tool sheds) are taxable real property contrary to I.C. 63-201(9) and by quoting I.C. 63-201(11). The State Tax Commission, through administrative rules is setting up the implementation of property assessment on RV trailers and motor homes not registered with the DMV.  Is personal property being morphed into real property for multiple taxation gains?  Contact your legislator before they deny or validate this administrative rule in Jan. 2018! 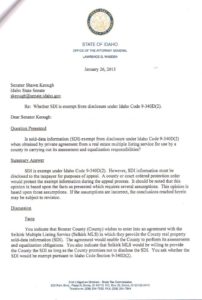 It was stated multiple times at the BoE hearing that appellants did not receive requested documentation, or the full documentation being used against them in their appeal.  Does the MLS “sale amount” that is listed in the Memorandum of Understanding, on page 2, at 1.1 – Duties of the County, create an inequitable violation, or an illegal condition?   Considering the legal opinion of the Idaho Attorney General’s Office dated Jan. 26, 2015 and an email from Assessor Clemons to Stephanie Rief, Selkirk Association of Realtors, dated Feb. 17, 2015, identifying sales amount information is a violation of privacy law and proprietary information.

Was a preponderance of evidence violation observed in a section 42, low cost housing appeal.  The appellant’s presentation, prevailing on the facts alone, was fortified when the presenter declared she was the lobbyist who wrote the current code!  Did the BoE dismiss the legally unique tax exempt condition as a matter of philosophy, contrary to the letter of the law, and thereby ceding the Assessor advantage in a certain appeal to the State Tax Commission Board or the District Court?

Has the Bonner County 2017 BoE hearings identified inequitable process in permitting homeowner exemptions for some name changes to property deeds and not others, in violation of Idaho code clearly identified by the Assessor’s Office?

“A really efficient totalitarian state would be one in which the all- powerful executive … control a population of slaves who do not have to be coerced, because they love their servitude.” 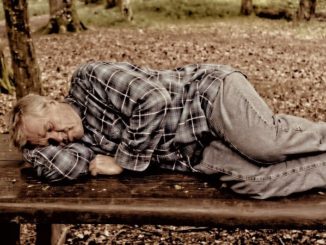 Making America Great Again – Where do we go from here?