It has been two days that the defense has been attempting to present their case to the jury in the Bunkerville trial being held in Las Vegas, Nevada.

Out of these two days, the jury has been in the courtroom about 15 minutes, or so. The remaining time has been filled with frustrations from the defendants and laughter from the Judge and prosecutors.

Yes, Judge Gloria Navarro continued to laugh at the distress of the defendants every time she slapped more evidence out of their hands.

Eric Parker said yesterday that he would testify, as he felt he had no other options. Navarro and the prosecutors subjected him to another round of intimidation today in their attempts to make him change his mind. Navarro has already threatened him with “enhanced” perjury charges if she feels he has not told the truth.

And the truth is very subjective in her courtroom. She spent most of the morning going over jury instructions. She intends to instruct the jury that just carrying a holstered weapon can be a criminal act. She also does not intend to allow the jury to hear that there is a “Right To Carry” law in Nevada.

The defense asked for an instruction to be included about the missing witness, Dan Love. They have been attempting to introduce video evidence. This video includes Dan Love and Pete Santilli, yet neither one of them are allowed to testify, therefore, there is no one available to introduce this evidence. Navarro dismissed that motion and will not allow the instruction.

The only bright spot today is that Navarro has finally agreed to allow Todd Engel to present his closing arguments. Engel is still not allowed to do anything else, including speak, in her courtroom, but he can represent himself in the closing.

I am happy that the defense was able to discuss the Facebook evidence. It has been stressed throughout the country and the government that Facebook posts and articles are not to be considered trusted sources. Yet, the prosecution has brought in over 500 posts, memes and more to show just how evil these defendants are. The prosecution has even gone so far as to suggest that using the phrase “Whatever it takes” is an implied threat. 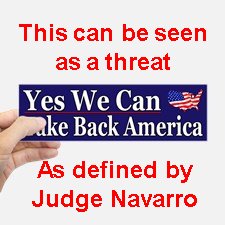 They have suggested very warped definitions of ‘threats to the government’. Navarro has made it clear from the very first day that she makes law in that courtroom, therefore, if she wants to distort the truth to the jury, then we must accept that.

The prosecution continues to stress their “ongoing criminal investigation” into UN-indicted Co-conspirators. They have suggested that they can prosecute people just for showing up to watch the protesters. They have even implied that if someone “Likes” a post on Facebook, that is evidence for conspiracy. Based on their definitions, just by reading this article you can be considered a conspirator. I guess I will continue to be on their list, as I will continue to write these articles and expose their corruption.

Navarro was not concerned with the defense arguments, yet it did get on the record. That made it worthwhile at least.

The defense also argued for “limited immunity” for select witnesses so they may testify to the events. The prosecution refused and the Judge agreed. They do not want the defense to have any witnesses, though the defense will likely present one or two witnesses.

After the prosecution had extended time, over five weeks, and the defense has yet to be allowed to call any witnesses, the Judge asked the defense if they were ready to rest their case tomorrow.

Walk Around Jericho – Rally For Bundys