It’s All About the Fiber & The Commercial Kitchen, part deux

By Anita Aurit
The Feb. 15th Council meeting did not address issues of significant importance to business. They had a presentation from Monica Hubbard from TING who gave a brief timeline of fiber services stating that they are focused on “planning and design”. They are communicating with residents, deciding which neighborhoods had the highest preorder. They will begin speaking with businesses in late March or April. They are currently working on fiber lease agreements as well as land use agreements and state franchise. Their first hire will be a city manager and the city will be leasing property to TING for a network hut of 3000 square feet. The lease amount will be 1945.00 per year.  (A $162.08 monthly rent is very nice, would like to find a deal like that for my business)

The Kitchen That We Kicked You Out Of Is Coming Back

The commercial kitchen equipment that was taken out of the “Business Incubator” that is now being leased to a private company at 26 Cents per foot (June 15 2016). After leaving these food businesses stranded, I found it a bit arrogant to hear the mayor say, “It’s going to be great to bring back the kitchen that was removed.”  If only the mayor could “bring back” the start-up businesses that either failed or incurred draconian costs to drive miles away to use a commercial kitchen.

The city administrator announced at the Nov. 2 meeting that the BID survey would be out in 2 weeks. After some technical glitches and the holidays, survey submissions deadlines were extended.

Finally, on March 1, Jennifer Stapleton provided a presentation  on the BID survey conducted by Boise State. There were many bullet points (I will include some below) but the bottom line is….there was no definitive information and no decision made   Here are some of the highlights:

Jim McKiernan, editor of the Daily Bee spoke in favor of the BID. This is the man who wrote an editorial regarding the BID stating that those businesses who do not pay should have their utilities cut off.

At the end of the day, nothing was decided and the issue was punted to the next council meeting on March 15th. The mayor ended the discussion with “Don’t expect us to make any hasty decisions.” 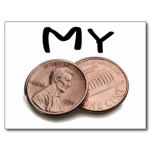 When I opened my business the forced BID tax was administrated by the DSBA (Downtown Sandpoint Business Association). In 2013 the Chamber took over BID administration and offered many promises, most of which were not kept.

Case in point. This snippet from the Chamber’s white paper on the BID administration takeover lays out the business sectors that were created. Each sector would have an appointed representative. My appointed representative (Professional Services) never contacted me. I had to schedule an appointment at the chamber and she was present. No further communication happened and I recently found out that she no longer lives in Sandpoint. I am not the only business with an “invisible” representative. 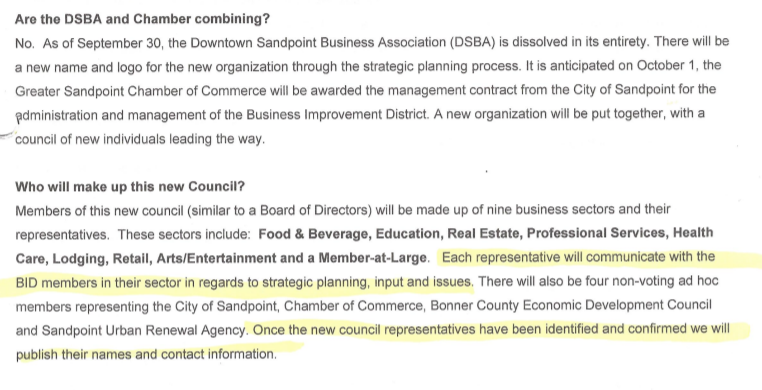 The chamber stated that BID members would have input on the expenditure of BID monies.  This was not my experience. I attended every BID member meeting, never was visited by my “representative” and never had any input in budget/expenditure matters. This is particularly perplexing to me as the BID spent over 50% on administrative costs annually and spent BID tax funds on private business events that other BID members were not allowed to participate in.

I found the comments in the white paper about the city’s involvement with BID oversight interesting.  At the July 6, 2016 meeting about the BID budget, the mayor and council were less than enthusiastic about how BID monies were being spent and exhibited surprise at the expenditure information presented at the meeting.

After years of taxation without representation and absolutely no benefit from the BID funds, I am of the mind that something needs to change, and soon.  This “death by a thousand cuts” is beginning to be a bit infuriating.

Finally, I am intrigued by the flip flop of the city regarding who can and cannot change or disestablish the BID. In years past the city attorney has stated unequivocally that the city has no power to disestablish the BID and that businesses must initiate the process, obtain a certain number of signatures and jump through other hoops. Somehow I missed the part where the legal control of BID disestablishment went from the business owners paying the tax and the city collecting the tax.

I urge all city businesses who have an opinion about the BID to attend the March 15th meeting.

Anita Aurit is the owner and operator of
The Office Sandpoint. 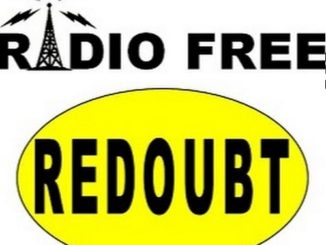 Schuyler Barbeau Part 2: In His Own Words 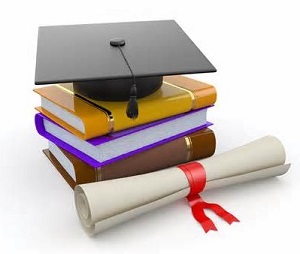