Freedom of the Press #11
Aiding, But Not Abetting

by Gary Hunt
March 3, 2017   (Coincidental to the presumed authority of Judge Brown’s assumption that she could Order me to answer by this date.)

The government has persistently suggested that I have “aided and abetted” the defendants by exposing informants that were paid by the government to spy on the occupiers of the Malheur National Wildlife Refuge during January 2016.  That is only one of the elements that needs to exist before the Court can find me in contempt of court for non-compliance with the Order to remove all prohibited material from my website and any other website.

The other elements include whether I am subject to the Court’s Protective Order, and, if so, do I fall within the jurisdiction of the Court.  Currently, the Court has an outstanding Order that I appear and show cause why I should not be held in contempt of court.

Well, as explained in Freedom of the Press #3 – “Contemptuous Postings”, aiding and abetting has a legal definition.  That definition can be found in case law as well as legal dictionaries, such as Black’s Law Dictionary, 5th Edition, which states:

Help, assist, or facilitate the commission of a crime, promote the accomplishment thereof, help in advancing or bringing it about, or encourage, counsel, or incite as to its commission.

The case law cited by the government shysters also includes criminal activity as a necessary element.  One of the reasons for the Supreme Court decision in New York Times Co. v. United States (Pentagon Papers) was that there was no crime resulting from the disclosure of the classified documents.  The Court then upheld, in rather strong terms, the right, even the responsibility, of the press to publish such information.

Key to that decision was an absence of aiding and abetting, since though the exposure of the information was in good faith and brought to light some misdeeds of government, the publication of that material was not criminal, nor did it lead to a criminal act.  The person (Daniel Ellsberg) who violated his signed agreement not to disclose the information, committed the only criminal act.  The New York Times aided and abetted no one.  (See Freedom of the Press #9 – “Prior Restraint”.)

Using her judicial discretion (See Freedom of the Press #7 – “Judicial Discretion” and Tyranny), she has determined that there is no party that I aided, since that party is unnamed.  She has also made the dissemination of materials a criminal act, though I, similar to the New York Times, am not subject to the Protective Order.

The government has not indicated whom I may have aided and abetted, nor have they indicated just what criminal act resulted from my publication of the prohibited material.  So, let’s look and see just who might have been aided by what I have disclosed.

There can be little doubt that the defendants in the Ammon Bundy, et al., Group 2 trial, currently being heard in Portland, Oregon, have benefitted as a consequence of what I have published.  They have subpoenaed, to the best of my knowledge, Will Kullman, and Allen Varner, to testify.  So, they have been aided, though not abetted, by my articles.

Since the exposure, in the Group 1 trial, of Mark McConnell, as an informant paid by the government, the voluntary act of Terri Linnell, and the exposure of Fabio Minoggio, may all have played a role in the verdict; there can be little doubt that identities of the informants may provide exculpatory testimony, to the benefit of the defendants.

However, in that trial, the government shysters and the Judge determined that disclosure of the informants, or even unredacted informant reports (the reports were heavily redacted and gave no indication of the identity of the informants), would not be necessary, as there was no exculpatory purpose in releasing that information.  The verdict clearly disputes the assertion.

Now, in the Group 2 trial, the government has demonstrated some integrity clearly missing in the Group 1 trial.  The government has admitted that there were 15 informants, and, that some of the informants were authorized to conduct criminal activity during their paid spying/infiltration of the MNWR occupation.  The law requires this disclosure if there is exculpatory information.  So, the Justice Department has abided by the law, perhaps due to my exposing of the informants.  Simply put, they have been aided, though not abetted, by my articles.

I must mention another group of people that have been aided by my writings.  This group is the primary target of those efforts and the exposures that have come to light.  As I have stated for over twenty years, I will write about the misdeeds of government.  The government putting spies in our midst is, without a doubt, a misdeed of government.  It is tantamount to the servant spying on the master.  When that master’s intention is to hold the servant (government) accountable to the contract (Constitution), the servant is subject to the scrutiny to determine the extent of his misdeeds.  So, too, is the government –as they have clearly demonstrated by being a bit more forthright in the Group 2 trial.

My intent to aid was directed at the people, my reading audience.  The affect, however, did aid the defense as well as the prosecution.  However, if there was any abetting, it would be more realistically described as “un-abetting”, if the government was acting criminally (along with the Judge) in hiding exculpatory evidence.  Hence, they have been un-abetted in their criminal activity, by exposing in the Group 2 trial what should have been exposed in the Group 1 trial. 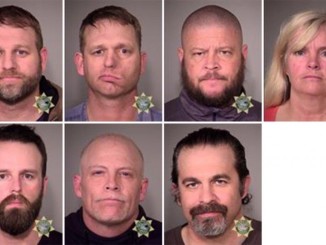 1 Comment on Freedom of the Press 11 – Aiding, But Not Abetting