Updates on the Political Prisoners in Nevada and Oregon

This week has brought lots of upheavals and news from the front lines with our political prisoners. I have talked to many folks with first hand information, and I will also quote some of the printed articles.

Ryan Bundy had a release hearing this week that lasted about 6 hours. Ryan was allowed to open the hearing in prayer and even read from the US Constitution during the hearing. U.S. Magistrate Judge George Foley is certainly different from the current judges that have been hearing these cases. I have heard many people say they feel Judge Foley is trying hard to be fair.

The prosecutors in that case seemed a bit miffed. They presented Ryan with the outline of their arguments for the hearing in plenty of time for Ryan to prepare. However, just before the hearing was to end, they handed him a list of 10 additional actions that he was expected to respond to. They argued that they were allowed this slight-of-hand and Judge Foley accepted their arguments. Foley may have been prepared to rule on the spot, but this stopped him. He gave Ryan several days to respond to the actions in writing and said he will give a written ruling after that.

More news on the Nevada trial includes Judge Gloria Navarro dismissing one count of the indictment against all of the defendants in the Nevada Bunkerville trial on Thursday. Her decision reduces by 25 years the mandatory minimum sentence the men will face if found guilty on all counts. She dismissed one count of conspiracy to impede and injure a federal officer.

All of the defendants still face a separate count of the conspiracy charge, but in tossing out the other count, the judge effectively ruled that the charge is no longer classified as a “crime of violence” — thereby reducing the mandatory minimum sentence from 82 years to 57 years.

Prosecutors have decided to try the case in three separate trials. The first trial is scheduled to open Monday in Las Vegas 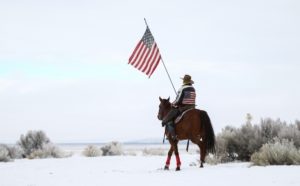 The Portland trial for the remaining Malheur Protesters is scheduled to begin on February 14th. There have been upheavals in this case as well. 4 of the 7 defendants have been offered plea deals, which reports have 3 of the 4 ready to accept. The deal will drop all felonies and leave them with a misdemeanor trespassing charge. The disposition expected is one year bench probation (basically policing themselves) and $1000 fine each.

This does not come without it’s drama though. It has been said that the remaining 3 defendants, Jason Patrick, Duane Ehmer and Jake Ryan, were not included in the discussions of a plea arrangement, and are now left to rearrange their entire case.

Judge Anna Brown made a big issue of insisting that the defendants run their case as a group, yet will be judged individually. The trial in September and October (which found the leaders of the Malheur Protest not guilty) had the defense attorneys taking charge of various aspects of the case (such as Robert Salsbury, attorney for Jeff Banta, taking charge of jury selection.) They were each allowed to subpoena witnesses to help the collective case, as well as their individual cases. This next trial was to be run the same way.

With these new developments, there are subpoenas issued that are no longer valid and the 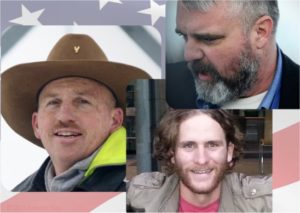 remaining defendants do not have the necessary time to have them reissued. They may be stuck which will violate more of their rights.

Sean and Sandy Anderson, Dylan Anderson and Daryl Thorn are expected to plea on Monday or Tuesday this week.

Duane Ehmer filed a motion this week to have Judge Brown removed from the misdemeanor case since it was reported that she discussed details and strategy with the jurors from the October case.

“The Court not only answered questions the jurors had, but also discussed the merits of the case with specific reference to potential misdemeanor offenses that could have been used by the government, including trespass and the perceived inadequacy of a sentence to the government” if it had pursued such a charge, Duane Ehmer’s lawyer, Michele Kohler, wrote in a motion to recuse the judge.

Kohler argued that Brown also invited jurors’ “advice for the prosecution” during her private meeting that lasted more than an hour after the Oct. 27 acquittals.

Kohler’s motion follows a recent ruling by Brown that the remaining seven defendants don’t have a right to a jury trial on the new misdemeanor allegations. The judge ruled that she would hold a bench trial on those charges once a jury is deliberating on the felony charges of conspiracy to impede federal workers, possession of weapons in a federal facility and depredation of government property.

It is thought that Ehmer’s motion had a major impact on the plea agreements being offered to half of the remaining defendants.

Even more on the drama front has the government with egg on their faces over BLM Special Agent Daniel P. Love.

A report released by the Office Of The Inspector General, said  a Special Agent In Charge of the BLM was found to have committed Ethical Violations and Misconduct during an event in 2015 called “Burning Man” held in Black Rock Desert, Nevada. The agent referred to in the report is thought to be Daniel Love.

Love was also the Special Agent In Charge of the Bundy Ranch Cattle Impoundment of 2014.Complaint after complaint was filed against Dan Love before, during, and after the protest, but failed to catch the eye of the Inspector Generals Office. This time the complaints came from within the BLM staff itself and it looks as though the “Super-Agent” will finally be held accountable.

This revelation came as no surprise to the people who live in States in which the BLM has taken on the role of Law Enforcement under the direction of Special Agent Daniel P. Love. Locals say they can attest that misconduct is an almost daily routine for the agency.

Prosecutor Steven Myhre filed a motion begging Judge Gloria Navarro to not allow questioning that involves past misconduct by the BLM in this or other operations, or any questioning of any of the agents that are set to testify in the trial that would make them look bad; And now we know why.

These revelations have caused a a whirlwind of motions and excitement in Las Vegas. The defense attorneys filed motions in federal court Wednesday seeking personnel files of all the BLM agents involved in the case. But the language in the filings reveals that lawyers are focused specifically on the identification of the unnamed supervisory agent targeted in the OIG report, whom they apparently suspect to be the same agent in charge of the cattle impoundment operation at Bundy’s ranch.

“Curiously, the report never actually names the Special Agent in Command who is the subject of the report,” defense attorney Todd Leventhal, representing defendant Scott Drexler, wrote in his filing. “This narcissistic and cavalier attitude towards the legal process calls into question at what lengths this Special Agent in Command may go to and whether or not future witnesses in the case at bar may be tainted with their testimony at trial for fear of ‘ruining their career’ as well.”

More filings in the case include Cliven Bundy filing a motion in limine regarding ‘Longbow Productions‘ with declaration by Brand Thornton, and a response to the government’s motion in limine filed last week.

Also, Steven Stewart filed a motion to dismiss on grounds that the government has just been caught covering up info regarding its star witness Dan Love.

Finally, Ryan Payne filed another motion to dismiss regarding the Dan Love revelations.

There are several things happening right now. We hope and pray this means the entirety of the government’s cases are falling apart.

Freedom of the Press 6 – Tilting at Windmills – Redux

Visiting Patch Of Heaven – with Video