The Murry murder trial continued this week with the defendant’s estranged wife taking the stand. Amanda Constable, who recently reverted to her maiden name when her divorce became final, testified this week for the prosecution.

Quite understandably, Ms. Constable looked afraid during her time on the witness stand. If this man had really killed her parents and her brother, and had intended to kill her, it would have been unnatural for her not to feel scared.

However, as she spoke of their relationship in it’s early stages, one might wonder at some of the red flags she raised not catching her attention at the time.

For example, Amanda spoke of the night she met Roy. Her mother, Lisa Canfield, met him as well and she (Lisa) was playful around him. Roy seemed startled by this and responded by putting Lisa in a headlock. This did not concern Amanda enough to keep her from agreeing to date the man.

Later, she discussed how she knew early on that Roy kept an unwritten “Sh*t List” on people that angered him. She told of how she believed that if he ever had the chance, without repercussions, he would kill the people on the list.

The mentioning of this ‘list’ was the subject of a few arguments and motions by the attorneys in the case. Larry Haskell, the District Attorney for Spokane County, argued originally to have this information given to the jury. The Judge, John Cooney, denied the motion. However, after the defense cross examined Amanda, Haskell brought it up again and convinced the judge to allow the testimony.

This seemed like a win for the prosecution but defense attorney, Jill Gannon-Nagle, effectively turned the tables on them. Under questioning, Amanda agreed that even though she knew of this list, it did not concern her enough to keep her from dating, getting engaged to and marrying Mr. Murry.

Amanda also talked about all the guns, ammunition (ammo), and prepping supplies that Roy stockpiled. This did not bother her during the early times of her relationship as she also liked guns, owning at least four rifles herself, as well as ammo for them. She also kept extra gasoline in her car and other emergency supplies.

She later had reason to be concerned about her husband, as his PTSD medications seemed to be making him tired constantly. But these were medical worries.

She told of how her husband was ‘socially awkward’ but, again, it did not bother her at first. She said that he would talk inappropriately about guns and politics, and that was occasionally a problem.

But none of this evidence placed him at the scene of the crime.

The prosecution did finally elicit information about a conversation Amanda had with him on the day of the murders. He knew she was going to work, and what time she was leaving home. This is important only if they can establish that Murry was at the property that night.

The testimony of the defendant’s wife was powerful in emotion. But, emotion should not convict a person of a crime. They need to start bringing out the hard evidence. 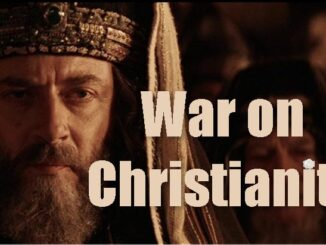 War on Christianity Comes to Spokane