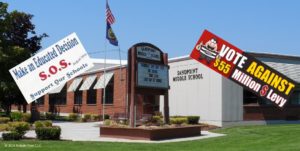 At over $55 million for six years, and brought to this point with little input from the taxpayers expected to pay for it, this levy has brought contention to this small North Idaho community.

Pitting neighbor against neighbor, the levy has drawn lines in the sand for most of the residents. There is a divide that has been described as nearly as wide as the Snake River.

There seems very little chance to heal the division at this point for either side, as the results of the election, whatever they may be, will certainly draw further criticism.

There have been multiple accusations of lies, and spinning the truth, from both sides. Social media has exploded over the issue with friendships being lost in the battle.

This does not seem to be a political issue, as members of all parties seem to be just as divided on the subject. Those normally on opposite sides of the fence on typical political issues have now banded together to get the vote they feel is important.

And it is important. Whether or not the rural, low income area can afford to have their school taxes doubled is a very important question.

You’ve got the supporters that feel no amount is too high for the children’s education. You have the dissenters that feel $55 million over six years is too much to ask.

Part of the contention is played out over the manner that this has been presented. This is a 6 year levy, not the expected long-term bond that is usual in plant facilities repairs or maintenance. This is a new funding mechanism that the district feels will better serve them. The buildings will be held as collateral in a lease agreement, similar to a mortgage, with the debt being paid off after 6 years.

However, this requires higher payments against the debt, where a bond would lower the payments over a longer period of time.

I should correct a point here. As I understand it, based on an Idaho Supreme Court Ruling, lease agreements are not considered debt. It is, however, considered a capital expenditure.

Additionally, this method only requires a 55% positive vote to implement, whereas a bond would require 67% voter approval. Superintendent Shawn Woodward acknowledges that this was a factor in their decision, as they feel it will be next to impossible to pass at the higher percentages.

There is a 3-part plan to completely rebuild, or remodel, all the buildings in the district. This is ‘Phase 1’. It is understood that when this one is completed, Phase 2 will require another plant facilities levy, though those figures have been unavailable to me. Phase 3 will, of course, follow Phase 2.

Plant Facilities levies, or bonds, are completely separate from the annual Supplemental levies, voted on every 1-2 years. Plant Facilities do not fund any basic operational costs, such as salaries, curriculum, or extracurricular activities. There will be another supplemental levy coming up in the spring , expected to be a 2-year levy for $15-16 million. The Plant Facilities Levy is strictly for buildings, and cannot be used for anything else.

Another point of contention is the speed this has come to the voters. Many districts across the country will tell you that they take several years to make decisions of this magnitude. From the first suggestion, to public townhall-style meetings, to securing financial details, it is not a normally, quick process.

The dissenters feel this was pushed through without consideration of the residents, and their financial hardships.

Informational meetings have recently taken place throughout the district. Kendon Perry, the Chairman of the Facilities Planning Committee, explained during one meeting, how they arrived at $55 million.

“About $8.8 million dollars accounts for the tax revenue that the district is legally allowed by the State of Idaho code to collect from taxpayers. And then, if you take that and factor a very conservative 2% inflation each and every year for 6 years, and total those 6 numbers, that’s $55 million,” Perry said.

“And then we took that, and we compared that against the projects that we had analyzed as needing some sort of attention, and said we can address more buildings.”

The district acknowledges that this amount is the absolute highest dollar they can ask for, and they do not apologize for it. Perry stated at one point that, “The fact is, there are $180 million worth of buildings in the Lake Pend Orielle school district that have been, overall, pretty well ignored for about 60-some years.”

Many residents are not buying it. Kathy Rose, a vocal opponent to the $55 million levy says, “There is a reasonable approach LPOSD can follow. With a 50-year plan we can ease the burden on taxpayers: one school at a time, addressing the worst building first.”

Superintendent Woodward agrees that the area is considered a depressed region. Understanding that Bonner County typically has a higher unemployment rate than the rest of the state, and admitting that approximately 50% of the students in the district qualify for free, or reduced, meals, he still feels that this is the best option for the district.

Senior citizens on fixed incomes could be hit the hardest. Concerns for these folks, including whether or not they will end up displaced from their homes, continue to hit high points during many discussions.

“I do empathize and sympathize with the situation,” Woodward tells us, and explains that he grew up in a very impoverished area. “Do we just decide to do nothing then? For these people any kind of an increase can be hard on them. So, I don’t know what the answer is to that.”

Regardless of the vote outcome, an enormous of amount of healing will be needed for this community. It is almost certain to flare up again in the Spring when the Supplemental Levy vote is due to be presented to the voters. One may wonder if the teachers themselves will end up taking the hit over building costs.