A former Bellevue, Washington resident who assisted in the management of the Silk Road 2.0 website was sentenced today in U.S. District Court in Seattle to eight years in prison and four years of supervised release for Conspiracy to Distribute Controlled Substances, announced United States Attorney Annette L. Hayes.  BRIAN RICHARD FARRELL, 27, who used the moniker “DoctorClu” on the Silk Road site, came to the attention of Homeland Security Investigations agents in July 2014.  Silk Road 2.0 was a hidden website designed to enable its users to buy and sell illegal drugs and other unlawful goods and services anonymously and beyond the reach of law enforcement. At the sentencing hearing U.S. District Judge Richard A. Jones emphasized that a strong deterrent message needs to be sent to people who sell illegal contraband on the dark web because such sites allow people to “hide in the cover of darkness in their houses.”

“The dark web is not the safe haven some think,” said U.S. Attorney Annette L. Hayes.  “This sentence should send a clear message to those who peddle illegal drugs via the dark web: you will be caught, prosecuted and face serious penalties.” 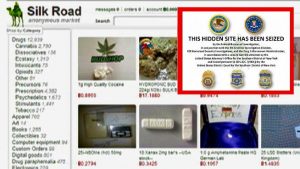 According to records filed in the case, Silk Road 2.0 went online in November 2013 following the government’s seizure of the first Silk Road website and the arrest of its alleged owner and operator, Ross William Ulbricht, a/k/a “Dread Pirate Roberts.”  In November 2014, Blake Benthall, a/k/a “Defcon,” the operator of the Silk Road 2.0 site, was arrested in San Francisco.  FARRELL was a key assistant to Benthall in running the site.

“Silk Road 2.0” was one of the most extensive, sophisticated, and widely used criminal marketplaces on the Internet.  The website operated on the “Tor” network, a network of computers on the Internet, located around the world, designed to ‘anonymize’ or conceal the true IP addresses of computers that used the network and thereby the identities of the network’s users.  Since its launch in November 2013, Silk Road 2.0 was used by thousands of drug dealers and other vendors to distribute hundreds of kilograms of illegal drugs and other illicit goods and services to buyers throughout the world, as well as to launder millions of dollars generated by these unlawful transactions.  As of September 2014, Silk Road 2.0 was generating sales of approximately $8 million per month and had approximately 150,000 active users.

FARRELL was one of the small staff of online administrators and forum moderators who assisted Blake Benthall with the day-to-day operation of the website.  Benthall and this small staff controlled and oversaw all aspects of Silk Road 2.0, including, among other things: the computer infrastructure and programming code underlying the website; the terms of service and commission rates imposed on vendors and customers of the website; and the massive profits generated from the operation of the illegal business.  FARRELL, operating under the moniker “DoctorClu,” was involved in activities such as approving new staff and vendors for the website, and organizing a denial of service attack on a competitor.  When a search warrant was served at FARRELL’s Bellevue home, agents seized $35,000 in cash as well as silver bullion and various types of drug paraphernalia.

“As one of the key masterminds and coordinator of the Silk Road criminal marketplace, Farrell profited from the destruction of untold lives,” said Brad Bench, Special Agent in Charge of HSI Seattle.  “Criminals who operate digital black markets and those who trade their illicit goods on them quite mistakenly believe they are above the law. It is one of HSI’s top priorities to shut down these hidden websites and bring their criminal operators and customers to justice.”