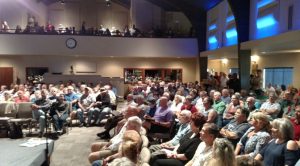 Proving once again, that the future belongs to those who show up, over 600 angry residents confronted King County’s Health Department staff at the final of four public hearings scheduled in the rural part of King County.  This final hearing was organized in Fall City.   The Citizens Alliance for Property Rights had reached out to many local members and rural residents who attended with a purpose.

King County formally announced  the county was dumping the Turd Tax for now (also called a “Septic Fee”).  King County Councilmember Kathy Lambert also indicated that they were planning to lobby the Washington State Legislature to change the poorly written laws that created the excuse for King County staff to invent this Turd Tax in the first place.

After experiencing standing room only crowds at every previous hearing on this subject, King County wisely changed venues to the Snoqualmie Valley Alliance Church just outside Fall City.  Despite being one of the largest venues in the area, overflow crowds packed the church with at least 500 people in the main room, a packed balcony, a filled hallway, and people crowding into every place they could fit.  Speakers were turned on in the lobby so that those unable to enter the main room could still listen.

The crowd was overwhelmingly opposed to the Turd Tax, and they were respectful but a little rowdy under the surface.  Even in the tax paradise of King County, a Turd Tax clearly had riled up resentment by the largely rural population still using some of the 85,000 septic systems in the county.  It was clearly not a go along to get along crowd.

Residents use public comment time to criticize King County anyway, which was fun

Which is probably why Kathy Lambert was so happy to announce the fact that King County had dumped the Turd Tax idea.  This generated a lot of good will (towards her, but not so much the King County bureaucracy, judging from the later comments) and a resounding ovation in the church.  While some people started to trickle home after this announcement, in order to enjoy the sunny evening – many people stayed to give their public testimony regardless.  The air conditioning was clearly overloaded with the volume of people in the building, but many attendees used the opportunity to tell their fellow neighbors about how incompetent King County was and how angry they were at King County government.

These comments included gems like the fact King County habitually lied to residents about all kinds of things and that code enforcement was abusive.  Repeated references to massive sewage leaks from wastewater treatment facilities in the Seattle metro area were discussed as scandals covered up by King County in order to grab more cash through the proposed “Turd Tax.”

Repeatedly people told the audience that they should not trust King County and that ordinances like the Critical Areas Ordinance and other abusive regulations were being used to harass rural residents.  King County was accused, repeatedly, of wasting the money they already get.  King County also was accused of ignoring science, failing to read the law, using bad math (or no math), failing to answer simple questions, and lots of specific examples were reiterated of costly demands imposed by out-of-control bureaucrats.

Representative Chad Magendanz (currently running for the State Senate in the 5th District) was in the audience and also testified about how a lot of abusive state laws like the one used to justify the Turd Tax had been passed by the Democratic Majority when they controlled all branches of government, and that removing them is a priority.  Most of these laws were giveaways to special interests (including local governments), but many of them passed under the radar.

He pledged to help lead the fight.  He had also helped organize a similar sized citizen town hall the week before in Ravensdale (where King County staff were given 2 minutes to speak for a change)

This was a victory for freedom and citizen engagement, but as many people stated, King County can’t be trusted.  Citizens must take point on holding the bureaucrats accountable.  We must support groups like the Citizens Alliance for Property Rights (CAPR) which has a full time citizen lobbyist to fight on these issues in Olympia.

One of my favorite quotes was from local Fall City resident Lance Keizer who was discussing how microbes work to break down waste and pollution:

“I don’t think we need more bureaucrats, but I think we do need more microbes…”

Republished with permission from We the Governed 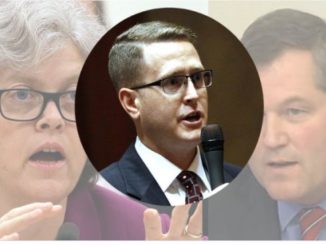 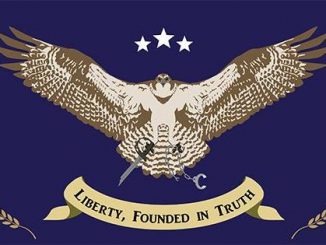